We’re adding a new segment on the blog called #TravelBackThursday!

We have gone on so many fun vacations over the years and have so many travel tips and gorgeous photos we want to be able to share with all of you. Today we are sharing one of my favorite trips, our September 2015 vacation to Glacier and Yellowstone National Parks.

We flew into Bozeman, Montana to start our journey, and then road tripped from there to Glacier National Park. I was pretty nervous about grizzly bears in the back country, so we had a few running jokes along the way. 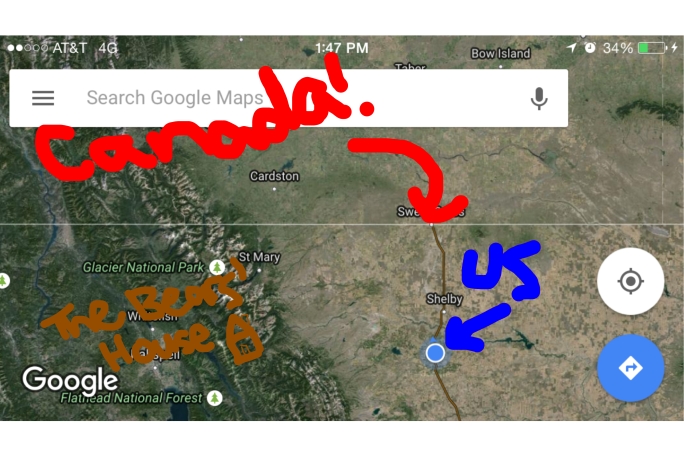 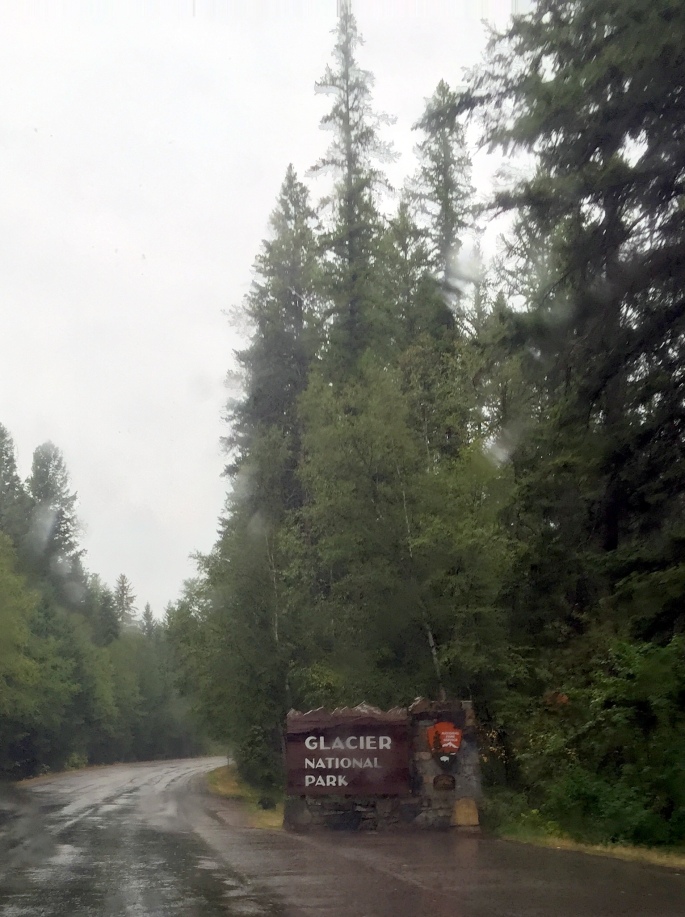 We stayed at Fish Creek campground our first night after driving most of the day to reach Glacier. 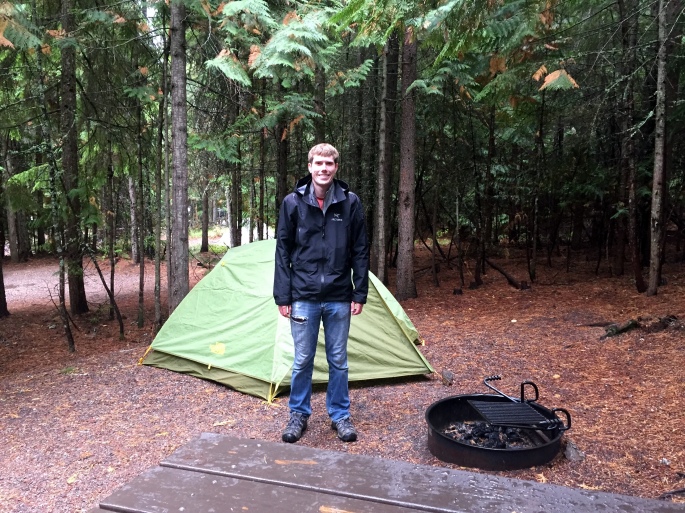 Unfortunately the wet rainy weather made for a cold night, so we spent some of our time before bed in the rental car, keeping warm. There may have been some wine involved 😉 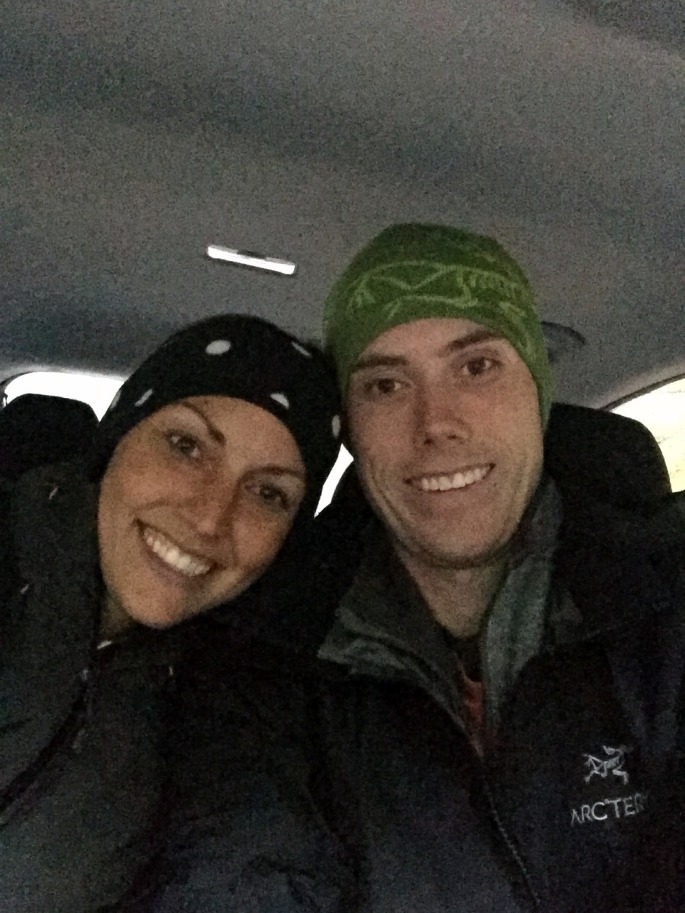 Our original intention for our backpacking trip was to take a shuttle to the north side of Lake McDonald and through-hike to Apgar Village campground and ranger station, but early snow shut down the Going-to-the-Sun Road and we were unable to take the shuttle. Fortunately we mapped out a backup route. Here is the map of Glacier that we used for planning. 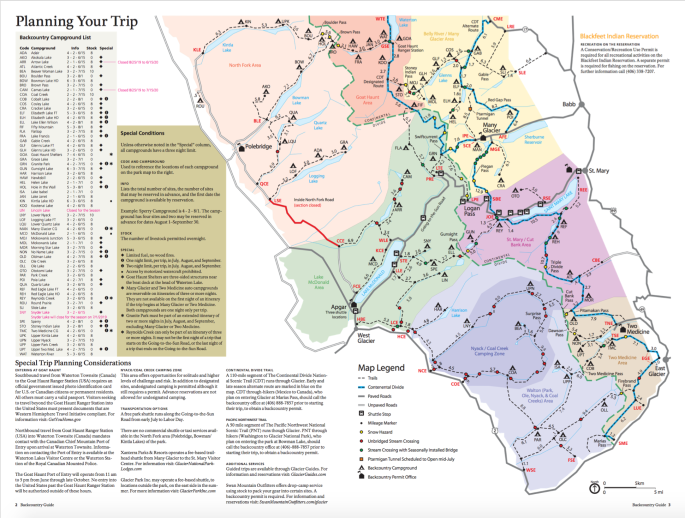 The Boulder Pass region still had open roads, and we ended up getting permitted for a Kintla Lake trailhead to Boulder Pass and Hole in the Wall out-and-back.

We started out our journey in great spirits. The weather was chilly but hiking kept us reasonably warm.

We did pack bear mace just to be safe. FYI, you cannot fly with bear mace so purchase it once you get to your destination. You can find what we took here.

The sights from the trail were beautiful. Here are our first views of Kintla Lake.

We set up our tripod a few times to get some photos of us.

This is the tripod that I bought for Jordan one Christmas, it works pretty well on the trail and is light enough to carry in our packs.

It’s easy to attach to trees on the trail for decent photos. 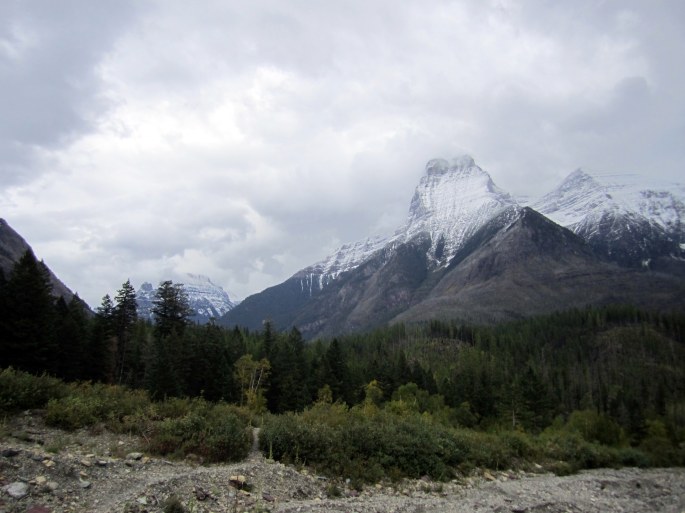 We saw signs of other campers, but did not run into anyone on the first part of the trail.

We made it to Upper Kintla Lake campground in reasonable time.

We had to string up our food to hopefully keep the bears from coming too close to our tent. Jordan was in charge of this job. We settled in for the night and had a freeze-dried meal for dinner. After a full day of hiking anything tastes pretty good.

At the Upper Kintla Lake camp, we met a few other hikers, Daryl and Justin, over dinner at the campfire. They happened to be an orthopedic surgeon and his PA, who were doing a bucket list through-hike to Brown Pass where they were meeting their wives and kids. We passed an enjoyable evening chatting with them about the differences in veterinary medicine and human medicine. We also were able to negotiate for some toilet paper, as Jordan had left ours in the car back at the trailhead.

Day 2 on the trail dawned bright and early, and we left our new friends behind as we headed out toward Boulder Pass. More warning signs for bears were posted along the way. 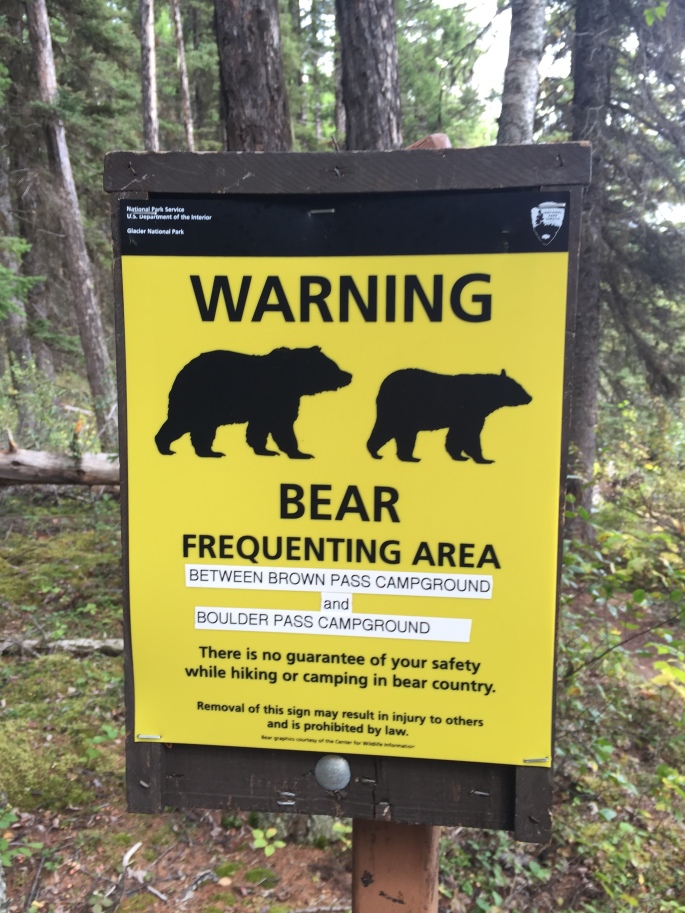 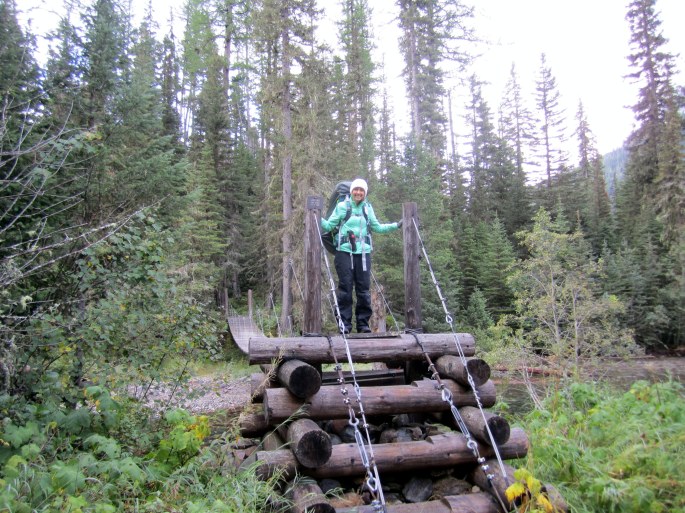 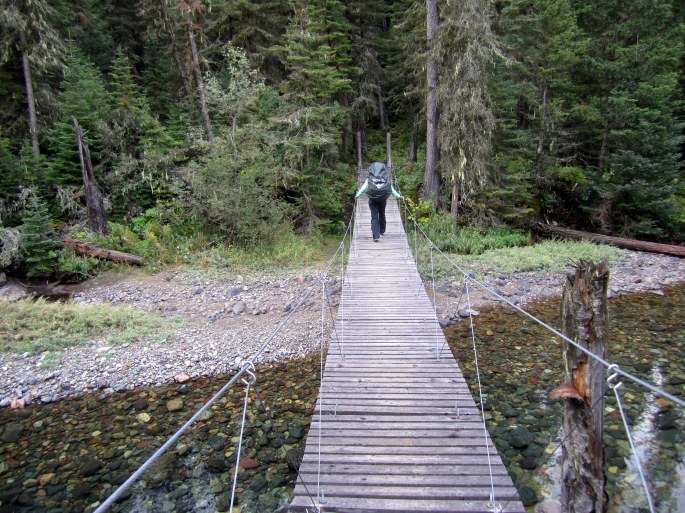 Unfortunately we hadn’t prepared for snow, and Boulder Pass was completely covered. Without gaiters we quickly became soaked in the knee deep snow and were worried about frostbite.

The views were incredible though.

Due to this being a mostly rocky area, the trail was predominantly marked by cairns. The snow had obscured the cairns and we ended up losing the trail and getting lost. There were footprints in the snow from hikers ahead of us who had also gone the wrong way, and we made the mistake of following these and losing the real trail. 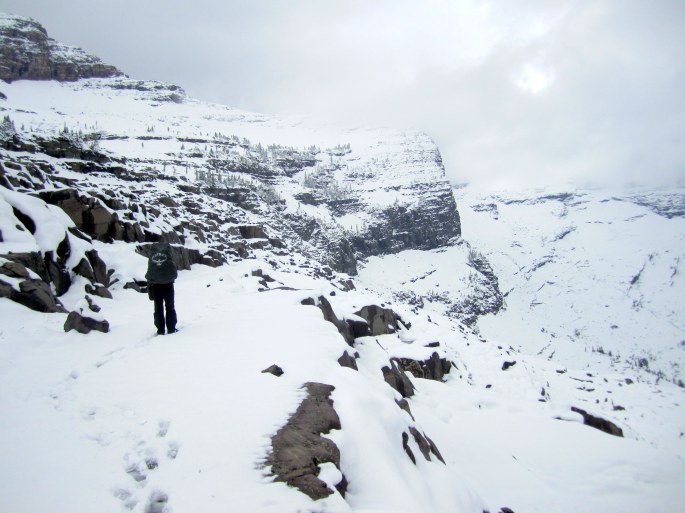 Our photos begin to get a little lean at this point, because after following three separate footprint trails we realized that we were lost. I was pretty panicked. We were up on a rocky precipice, and could see down into the valley below where we believed our destination, Hole in the Wall Campground, was based on our maps and Jordan’s orienteering. We ended up crossing a narrow rockfall along the rim of the valley, which was terrifying as we kept stepping into crevices between the rocks in the rockfall, due to snow obscuring the footing. I was convinced one of us was going to break a leg and we were going to die up there in the snow. We made it far enough along the rim of the valley to see what we thought might be the trail below. We were across the rockfall and there was a large, reasonably gently sloped snowy embankment that we ended up sliding down to get back to the trail. Jordan unfortunately lost his large machete hiking knife in the slide.

View from the bottom. 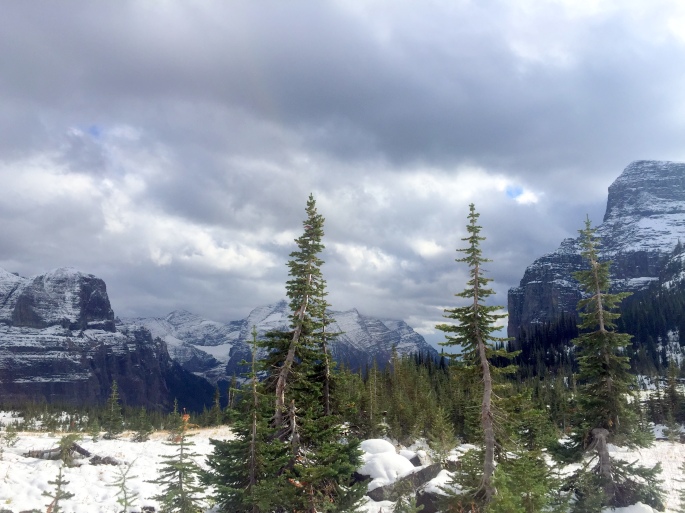 It was starting to get into late afternoon, and we still hadn’t made it to the campsite.

We were also worried about our campground friends, Justin and Daryl, from the previous evening. We had fumbled around in the snow for several extra hours that afternoon, and there was no sign of them. We worried that they had mistakenly followed our path and might be lost or injured. Unfortunately with no method to communicate with them, we pushed on and hoped for the best.

We finally found the signs for our campground and made it there by early dusk. 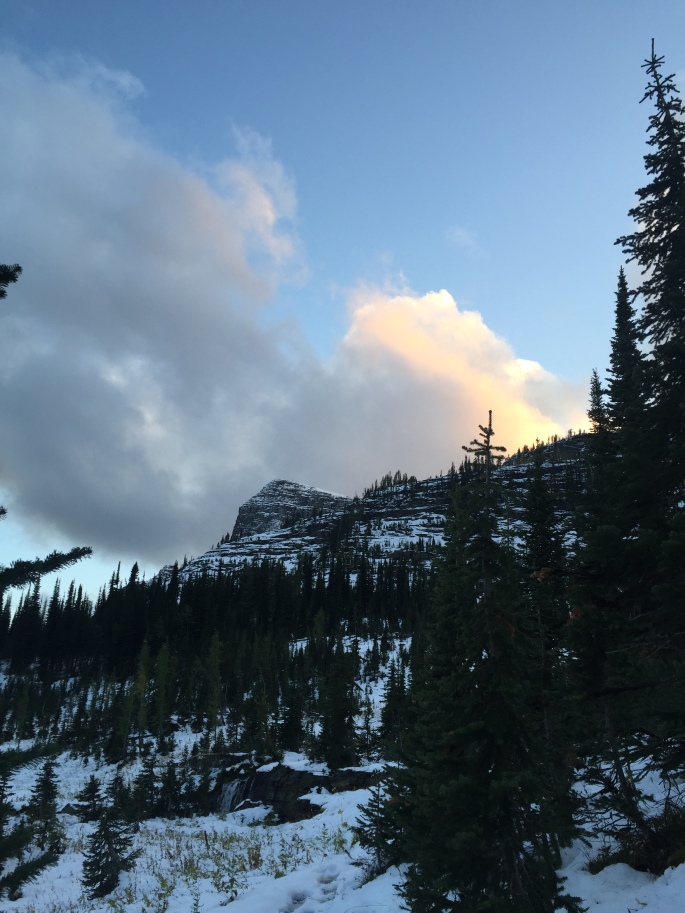 The campsite ended up being completely under snow, so we had to dig out the tent site before placing our tent. We were also unable to start a fire due to a lack of dry kindling in the area, so we heated up our dinner with our SnowPeak stove.

We had a rough night trying to stay warm and trying to dry our feet out to avoid frostbite.

In the morning we woke up to a whiteout. We started our hike back up and out of Hole in the Wall. The fog was so thick at times we couldn’t see the trail in front of us. 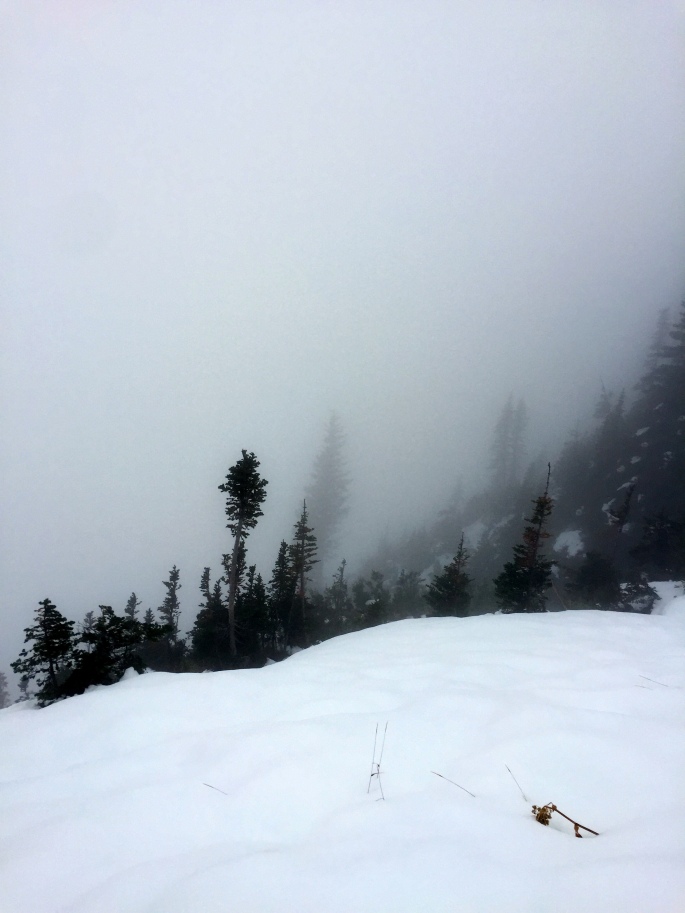 About 100 yards from our campsite we found grizzly tracks.

Fortunately there was no other sign of a bear, and we hiked slowly and talked loudly as we went to hopefully scare off any bears in the area.

We made it to the top of Boulder Pass again and stopped for a photo opportunity. 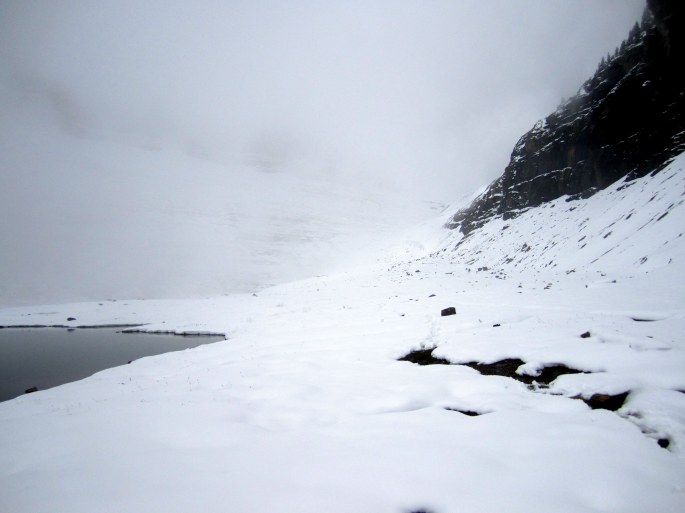 Once we made it through Boulder Pass we were back on the side of the mountains with less snow. At this point we ran into Justin and Daryl from two nights before! They were headed back the same way we were, and we paused to catch up on the previous day’s events, briefly.

It turns out that they saw where we had mistakenly turned off the trail, and they kept going the correct way but eventually lost the trail as well. They had a satellite phone with them and were able to contact the ranger station, who told them that the trail was difficult to follow even when not under snow, and just to set up camp in a safe location and head back in the morning. The pair ended up pitching their tent on the rim of the valley without making the descent, and had started back early the next morning. Since they were only permitted for their through-hike and were going to miss their family at Brown Pass, we encouraged them to follow us back and offered to give them a ride back to Apgar Village where they could meet up with their families. They figured it was a fair trade for the toilet paper we had previously borrowed.

The four of us descended the backside of the mountain fairly quickly. We ran into multiple groups of hikers on our descent, including a pair of speedily hiking women who had just had a grizzly encounter. Jordan was so excited to potentially see a bear that he sped the rest of the way down the mountain, leaving our friends in the dust.

The quick descent led us back into the forest towards Kintla lake, however we did not see any signs of the bear.

The weather was warming up and we were chugging along to make it the 16+ miles to our campsite for the evening. We arrived and set up camp, and Justin and Daryl made it in a few hours later. We shared our campsite with them since the other sites were full.

The fourth morning we hiked our way out and drove back to Apgar Village for a well deserved break. We finally said goodbye to our new friends, and wished them well on their journey.

We had a huge meal at Eddie’s Cafe in Apgar Village, including delicious huckleberry cobbler, and stopped for a photo to prove we survived.

Then we were off on the next leg of our adventure, Yellowstone National Park! Stay tuned for Part II 🙂

If you have any questions about our journey or need any tips for your next one, feel free to ask below in the comments!

9 thoughts on “#TravelBackThursday Glacier and Yellowstone National Parks, Part I”